On Tuesday, October 22, 2019, Alan Oberman of John Brooks Recovery Centers and NJATOD member, was recognized with other honorees at the centerpiece of the AATOD Conference.  This moving tribute recognized individuals who have been nominated and selected by their peers for extraordinary service in the opioid treatment community. These successful Award recipients have devoted themselves to improving the lives of patients in our treatment system. Dr. Vincent Dole and Dr. Marie Nyswander were the first recipients of this Award in 1983. The Association has been responsible for bestowing this honor since the first Regional Conference of 1984 in New York. 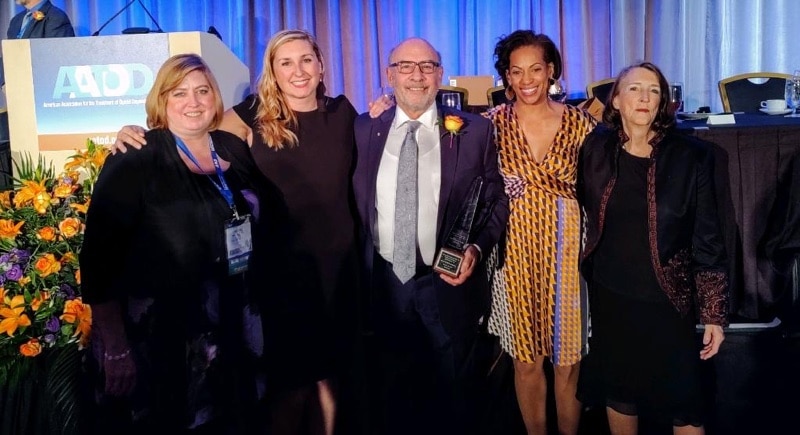 Mr. Oberman has spearheaded many significant innovations.  In 2005, he integrated methadone into all programs in a comprehensive addiction recovery center. He helped launch the state’s first mobile OTP units, helped relocate tow aged OTPs and replace them with state-of-the-art facilities. In 2012, no amount of pre-planning could have prepared the state’s OTPs for the devastation and chaos caused by Hurricane Sandy.  JBRC, located in coastal Atlantic City, was forced to evacuate and close for six days.  Mr. Oberman worked tirelessly with local OTPs and emergency management personnel to transport and medicate over 600 patients.  Not one patient relapsed during this time. In 2017, Mr. Oberman opened the state’s first licensed MAT program in a jail using a repurposed bus; this program now serves as a statewide model for several other nearby jails. Mr. Oberman fiercely advocates for free distribution of naloxone and is a committed colleague to his OTP peers, elected officials and other stakeholders in the region.